Cosmetic surgery sparked popularity in the 1970s when the rich or famous wanted to simply enhance their natural appearance. Now, with shows like Botched dedicated to surgeries gone wrong and celebrities like Chrissy Teigen openly praising their procedures, cosmetic surgery is reaching peak popularity in society. Often people go into a procedure with idealistic expectations set of looking like a specific person and well…many times the after shows no resemblance. This article dives into some of the most transformative cosmetic surgeries in recent years. 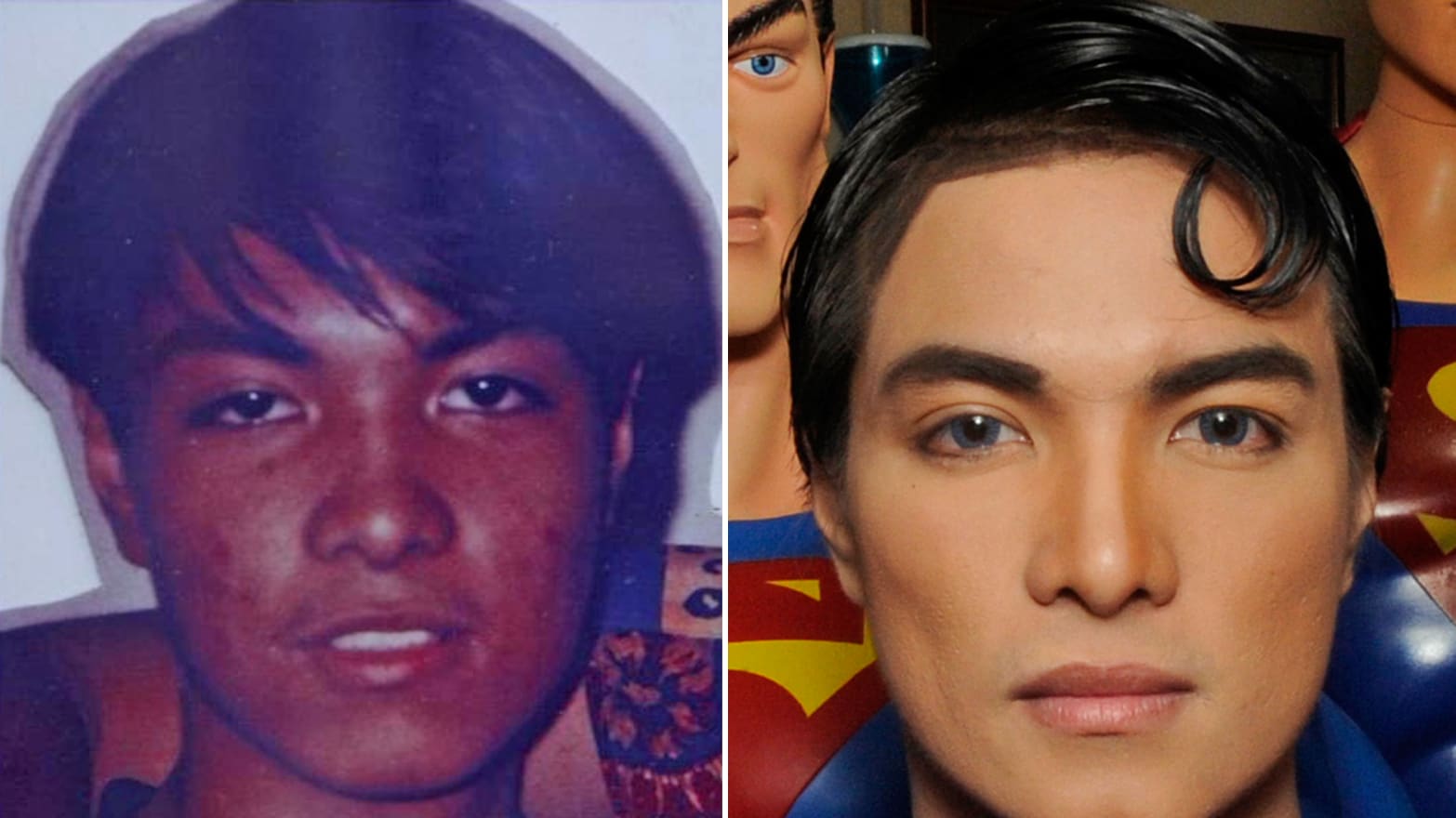 Herbert Chavez, a Filipino man who has undergone over 16 years of over 23 cosmetic procedures, is not just a fan of Superman, but he’s a super fan. Chavez wanted to be the hero in every way, including the outward appearance, which could be tricky as Superman and Chavez are two different people from two completely different races. Chavez, however, didn’t let this set him back. Starting in 1998, Chavez has received surgeries on his nose, jaw, lips, and hips. On his body, he’s had pec implants and butt implants. He’s received skin whitening procedures, had blue contacts permanently implanted into his natural eye, and even wanted to undergo a leg lengthening procedure, which is known to be one of the most painful and dangerous procedures. Chavez didn’t stop there. It was discovered that he was secretly injecting himself with “MesoLipo,” which is illegal in the United States, to try and give himself a set of abs. Instead of having a full set of abs, this was actually extremely life threatening and he was essentially injecting poison into his body. With his newfound fame of resembling Superman, Chavez is starting to believe that he is morphing into Superman with his life and looks. I don’t think he can just put on a cape and call himself a hero, though. If so, everyone could be a superhero overnight. 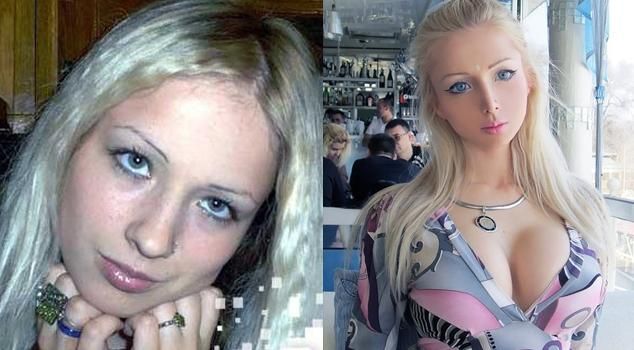 Barbie has been a staple in children’s lives since her debut in 1959. With her long blonde hair, stylish fashion sense, and model physique, she has the seemingly perfect life. At least that was the idea for Valeria Lukyanova, a 34 year old Ukranian model who has been deemed with the title of the world’s human Barbie. Her transformation started with dying her hair platinum blonde, but the surgeries quickly followed afterwards. Though Valeria only claims to have received breast implants, rumors fill the web with accusations of her removing ribs to achieve her tiny waist and of trimming her eyelids to achieve her huge, doll-like eyes. Nonetheless, Valeria’s transformation is a prime example of how cosmetic surgeries build upon the beauty standards set by characters such as Barbie. 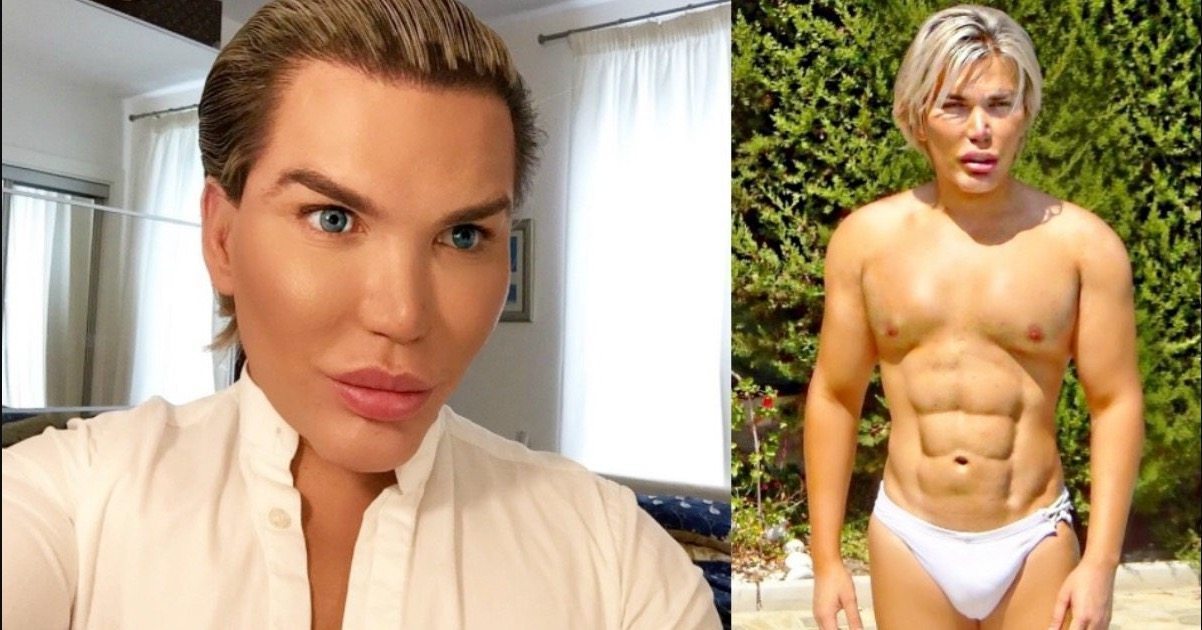 Now there can’t be a Barbie without her Ken could there? Rodrigo Alves, a 36 year old from Brazil, underwent 103 cosmetic procedures to achieve his ideal Ken body and face, costing him over $500,000. His regular surgeries include facelifts, botox, hair implants, and 11 nose jobs, but Alves goes above and beyond in crazy procedures. He’s had liposuction, gel fillers in his shoulders and arms, pec implants, rib removal, and even installation of a fake six-pack. In fact, his surgeries have turned into an addiction that could be potentially life-threatening. If Alves continues with these procedures, his facial tissue is in danger of sinking and leaving a hole in place of his nose. Would Barbie still date Ken if he didn’t have a nose? Probably not. 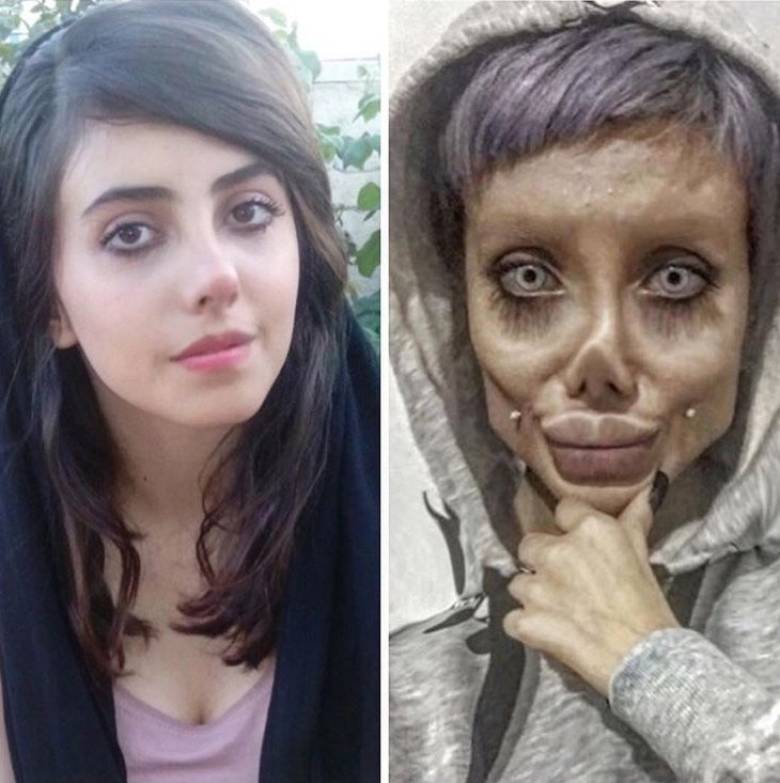 Having Angelina Jolie’s signature cheekbones isn’t a feature that many people can embrace, but Sahar Tabar, a 22 year old from Iran, took upon this feat. By undergoing 50 cosmetic surgeries just within one month, Tabar finally achieved her Angelina “look,” or so she thought. Besides receiving numerous lip fillers and a nose job, it’s evident that Tabar’s cheekbones are heavily sunken in and her chin appears to be much more chiseled. To complete her transformation, Tabar even forced herself on a strict diet to bring her weight down to 88 pounds. These pictures blew up on social media where users compared her new face to a zombie and even the bride from Tim Burton’s movie The Corpse Bride. With the intentions of looking like a movie star, Tabar ended up looking like a terrifying, fantasy character instead. 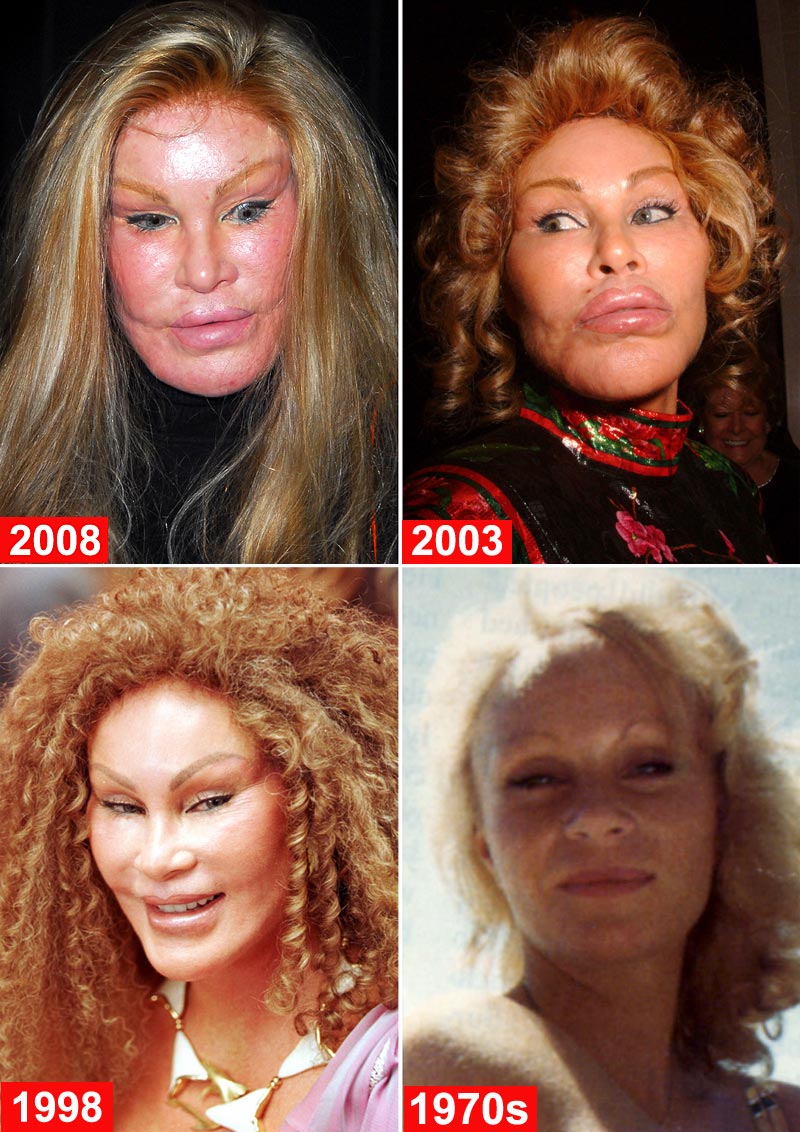 Catwoman is famously known as an important character in the DC comic world. While the fictional Catwoman’s appearance solely pertained to her wearing a suit and mask that resembled a cat, Jocelyn Wildenstein, or the human Catwoman, wears the feline features on her actual face. The 79 year old socialite from Switzerland is famous for being a party involved in one of the biggest divorce settlements in history when she divorced her late husband in 1999. Not only did she walk away from this divorce $2.5 billion dollars richer, but she walked away with the press following her for her distinct feline features. Wildenstein allegedly received multiple procedures to achieve this look in order to please her ex-husband, a  dedicated cat-lover. Her initial procedures included canthopexy, which elevated her eyes to give them that feline look. After this, she began to receive more and more procedures including brow and face lifts, lip injections, chin augmentation, and even cheek implants. Similar to many other plastic surgery addicts, Wildenstein has spent a large sum of money on her procedures that total to over $2 million. Whereas the comic character Catwoman has the ability to scare people off with her whip and weapons, Wildenstein, truly a human cat-looking-woman, can probably scare people off without any effort. 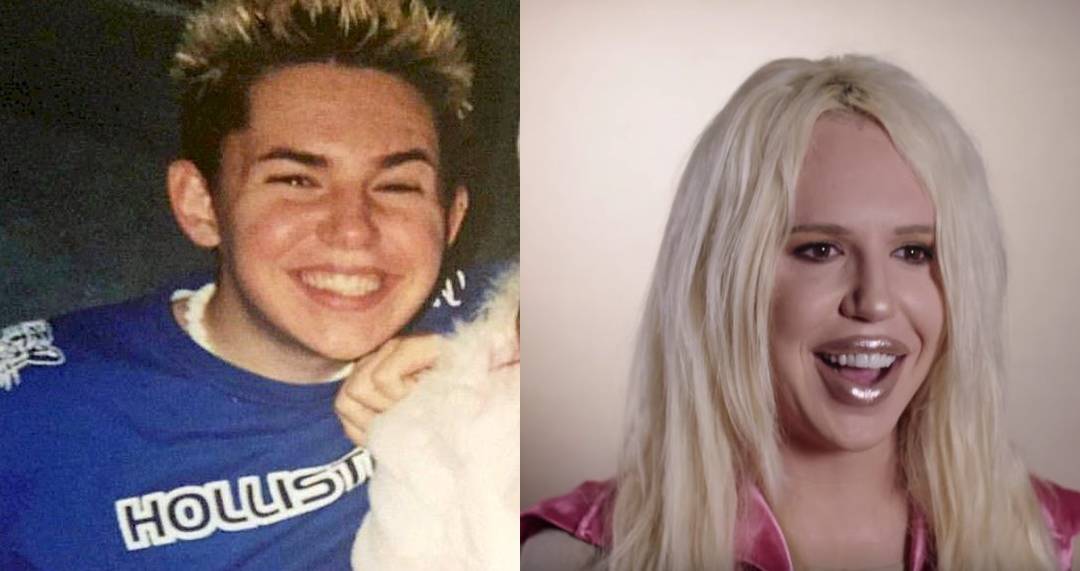 Being a superfan isn’t an unnatural thing. Most superfans attend concerts, buy the artists’ merch, and download all their songs. Bryan Ray, a Britney Spears superfan, decided to take his dedication as a fan of Britney to the next level by changing his appearance to match hers. The 33 year old has had countless procedures done starting from when he was 17 years old. He’s had over 100 procedures done on his face and has spent a total of about $100,000 for his transformation. His first procedures included veneers and contouring his gumline to achieve Britney’s smile. After that, he’s gotten nose jobs, fat injections in his cheeks, a brow bone reduction, and frequent Botox injections. Not only has Ray used cosmetic procedures to embrace his Britney appearance, but he maintains it with a very strict skincare routine, spending about $2,000 a month just on skincare products.

7. Out Of This World

The topic of aliens and extraterrestrial life has been a popular topic for the last couple of years with some people who are firm believers of their existence and some who refuse to believe it. How about someone who wants to transform into an alien, though? Vinny Ohh, a 26-year-old makeup artist and model, seeks to become a “genderless alien” with the help of cosmetic procedures and makeup. Ohh has gone through over 100 procedures, and some of them are mind blowing. On his face, he’s had his forehead realigned, a nose job, eyelids revised, lip fillers, jaw implants, cheek implants, and ear pinning. Here’s where it gets crazier, since Ohh’s goal is to become a genderless alien, he’s had surgery to remove his genitals, nipples, and belly button. Ohh’s intention to become a genderless alien stems from the fact that Ohh has always felt like an outcast and believes that “people shouldn’t be labeled.” Doctors have informed Ohh that these procedures and the journey have been life threatening, but like many other cosmetic surgery addicts, this risk doesn’t seem to bother Ohh. 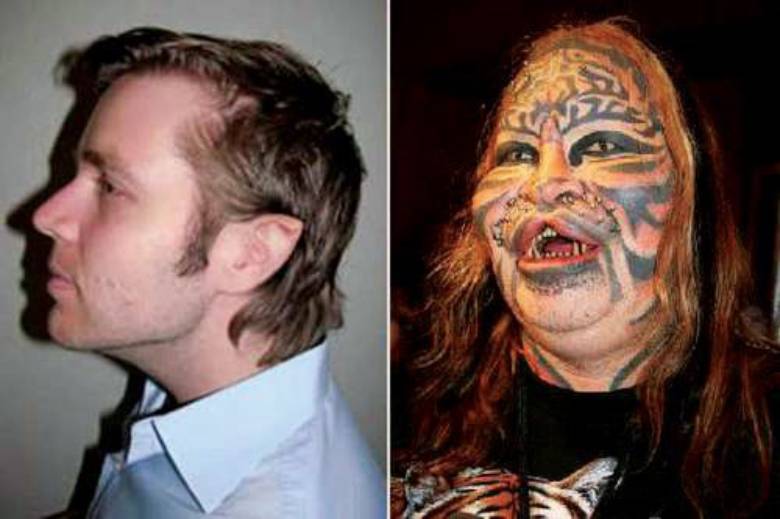 Dennis Avner, before his death in 2012, was known as the Stalking Cat. He has held the world record for “most permanent transformations to look like an animal.” Wow, there really is a world record for everything. Avner decided to leave his job as a technician to fulfill his calling to be a feline creature, undergoing over 14 procedures to achieve this look. His cosmetic procedures included receiving many facial implants, septum relocation, lip, cheek, and chin injections, splitting his upper lip, and also surgically shaping his pointed ears. He also filed his teeth to make them pointier and wore green contact lenses with the irises slit. Evidently, Avner also received extensive tattooing on his face and body. The reason behind Avner’s goal of transforming into a feline creature is a bit different than those described in this article. While other people wanted to look like their idols, Avner wanted to look like a cat because he wanted to resemble his totem, a tiger, since his parents were of Lakota and Wyandot tribe heritage. His name of “Stalking Cat” was even given to him by a medicine man in the tribe. Avner sadly passed away in 2012 in his own home. 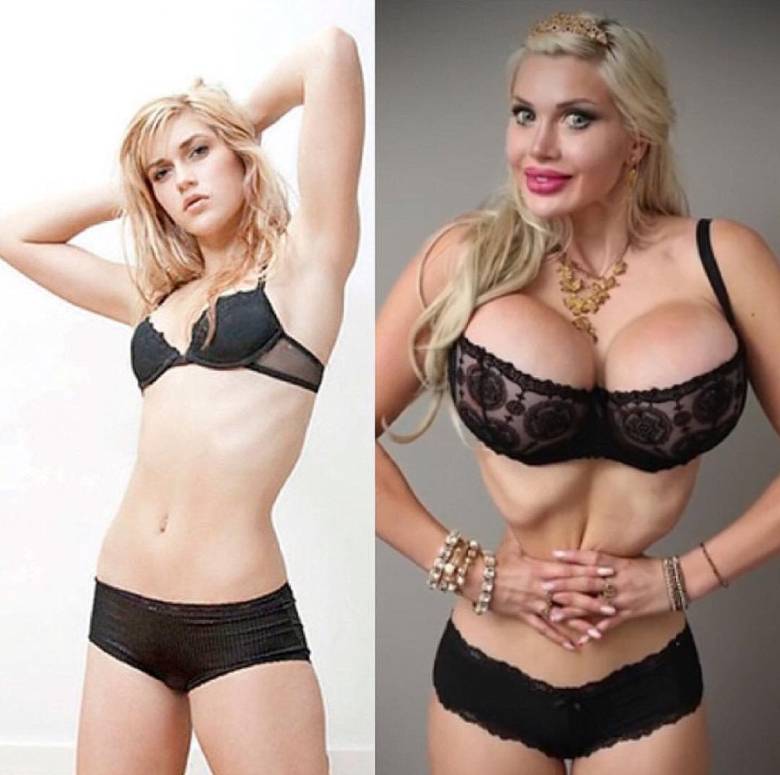 If Tinkerbell has taught the world anything, it’s that we all need some faith, trust, and pixie dust! Pixee Fox put a little too much faith and trust into cosmetic surgeries to help her transform into Tinkerbell. The 30-year-old from Sweden was a former electrician, but she gave up her job and turned to wanting to become an actress. Fox has received over 200 surgeries to look more like a cartoon and has gone through 4 boob jobs, brow lifts, a complete facial reconstruction, cheekbone reduction, and an eyelash transplant. Although she wanted to get more done, doctors warned her of the dangers and clearly stated that Fox is also a plastic surgery addict. Not only has she had multiple boob jobs that have increased her chest size up to a 30J, but she had 6 of her ribs removed to achieve her tiny 14 inch waist! Talk about having a snatched waist. Fox traveled to South Korea, a country known for the regular use of cosmetic procedures, where her facial realignment surgery left her paralyzed for a week. Although Fox’s intention was to look like Tinkerbell, people compare her figure and looks to that of Jessica Rabbit.

What Does Cosmetic Surgery Entail?

This article discussed some of the very extreme cases of cosmetic procedures where people underwent insane surgeries that could have been potentially life threatening. A couple of trends and patterns can be observed through all of these people. The first trend is that most of these people have an idealistic view of what they want to look like after their surgery. Whether that be a celebrity they look up to or an idol they have, by starting with the smallest changes to their face, they can feel like they’re just a couple steps closer to achieving their ideal look. This also stems from the unrealistic beauty standards that are set in society, pushing people to believe that they should look a certain way. A second pattern is that with these extreme procedures, it seems to be more and more addicting as they continue to get more work done. Honestly, it’s so respectable that they’re able to ignore all the comments about them and that they’re really just living for themselves. In some ways, cosmetic surgery is somewhat psychological. Once a person sees that a small change can make them look drastically different, they’ll want to continue making “small” changes until the transformation is done to an extreme.

There are extreme transformations, but cosmetic procedures are also used on a more casual basis in many countries, especially in places like South Korea. Smaller procedures such as double eyelid surgery or fat reduction in the face is somewhat a norm in South Korea now, and people can find cosmetic surgery practices in many popular neighborhoods. In other countries, regular Botox and lip injections are seen as the norm. The popular procedures differ from countries based on the different beauty standards in each of them. Whether it be extreme or not, the main goal of plastic surgery is for people to find a safe way to gain self-confidence in their outer appearance.